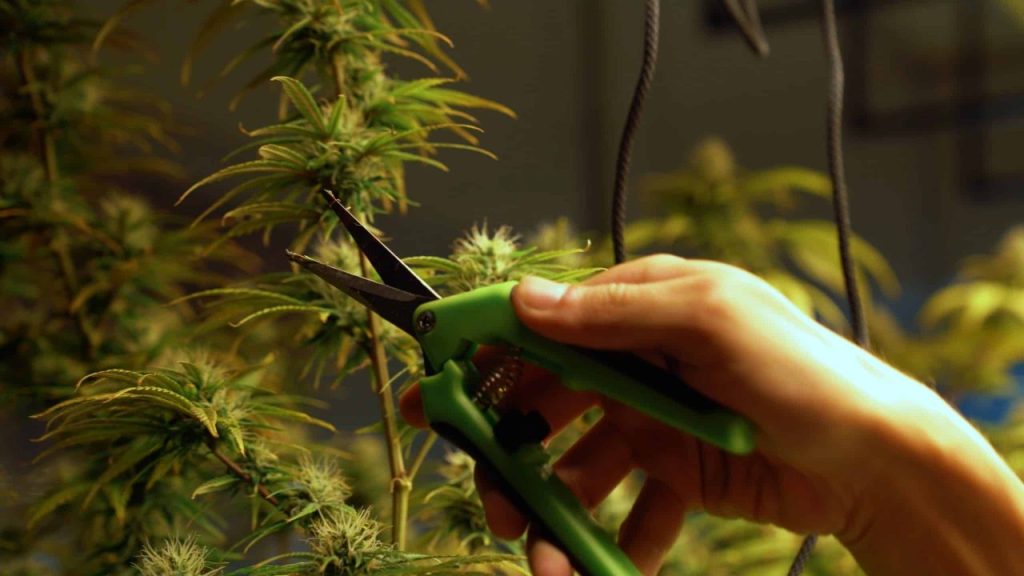 Some cannabis farmers consider themselves “purists” and let their plants grow entirely unchecked, but you ought to know that trimming is vital if you want large yields from your plants. This method allows the plant to be managed and improved in terms of output. In this post, we’ll examine apical pruning, one of the most common and effective methods, and learn why it’s vital for cannabis and cannabis light plants.

What is the purpose of cannabis pruning?

Pruning is a well-recognized agricultural practice with deep historical origins. Removing the plant’s extraneous portions is common practice to optimize development and guide it in a certain direction.

In the same manner, trimming your hair can help it grow stronger by eliminating split ends and brittle patches, and it will also benefit healthy hair by improving its texture.

A plant that develops totally on its own may have less organized branches, may not get enough nutrients since its surface is covered in leaves, will grow unevenly, and will surely have some portions suffer when it flowers.

Dead or diseased leaves on a naturally growing plant will always be half-yellow or half-brown, and no one will ever bother to remove them. Surely you are the one who gets rid of them. Pruning, in which leaves are carefully removed, allows the plant to absorb oxygen better. Those that are too many, and the dry or unhealthy ones destined for the garbage, should be removed. Growers of cannabis and light cannabis should count on at least one pruning session per plant every harvest in addition to the soil quality irrigation system and exposure to light.

Pruning isn’t only beneficial for disease prevention and treatment; it also helps maintain your cannabis plants all the same height and uniformly illuminated. A plant’s nutrients and growth hormones would be better put to use if its form were optimized; therefore, it could be a good idea to alter its structure to emphasize its strongest features and prune away its weaker branches. If you want higher crop yields, it’s obvious that pruning may be a game changer.

A plant that develops fully naturally could have certain nutritional deficiencies. There may be a few leaves that are too numerous or branches that are less developed and destined for poor blooming; either way, keeping them where they are would make the plant’s structure weaker.

Pruning is done with the specific intention of concentrating the plant’s resources and nutrients to promote the growth of the portions of the plant that have the potential to be the most beneficial and productive.

If not trimmed, a cannabis plant or even a plant of light cannabis will likely generate many buds, but each one will only be a few millimeters in diameter. Rather than fully concentrated into a single bloom, the active component would be diluted into a large number of little blossoms that are more than a little inconsequential.

Why is apical pruning done in the first place?

There are many different pruning methods, but apical pruning is said to have the finest “simplicity-to-resistance” ratio. Even cannabis cultivators with less expertise could employ this method without too much trouble, provided they take certain precautions beforehand. This cut, which needs to be performed at the height of the main branch’s final node, allows the buds underneath the cut to grow into two new, luxuriant apical ones. This cut should be performed at the height of the primary branch’s final node.

After the apical tops have been plucked from your plant, the side branches will continue to mature and become more robust, at which point they will be prepared for another round of apical pruning. You will end up with a far larger number of branches, but rather than growing upwards, they will take on the form of a shrub. On the one hand, this structure promotes regulated light exposure for all plant sections. Likewise, on the other hand, it guarantees that the cannabis plant’s nutrients and development hormones are more uniformly distributed throughout the plant.

The blossoming process could be delayed due to this slowing down but be assured that the wait will be well worth it. This sort of pruning includes a subtype termed FIM pruning and comprises cutting immediately before the final node. It allows for the growth phase to be used for more lateral branching.

Apical pruning allows growers to control the height of their cannabis plants, which can be useful in situations where space is limited.

By removing the main stem and encouraging the growth of multiple side branches, apical pruning can produce a higher yield of buds per plant.

By removing the main stem, light can penetrate deeper into the plant, improving the lower branches’ overall health and growth.

Apical pruning can also increase the density of buds on the plant, resulting in a higher yield.

Removing the main stem improves the overall air circulation within the plant, which can help to prevent mold and mildew from forming.

Better use of nutrients

By encouraging the growth of multiple side branches, apical pruning can lead to more efficient use of nutrients, resulting in healthier and more productive plants.

Apical pruning can also lead to increased resin production, resulting in higher potency and a stronger aroma of buds.

Apical pruning can encourage the plant to grow more branches, leading to better structure and a bushier plant.

It’s important to remember that while apical pruning can bring many benefits to the plant, it can also stress it. That’s why it’s important to wait until the plant has grown enough before doing it and to monitor the humidity and temperature levels in the grow room after pruning to prevent mold and mildew from forming on the fresh cuts.

Where and when to do apical pruning

When performing an apical prune, wait until the strain has established at least three nodes. If the plant has not yet produced three nodes, healing from trimming will be very challenging. It might cause paralyzed growth. Pruning has to be done during the growth phase. This development period would be blocked and some output would be lost if the decision were taken during the blossoming stage.

Be neat and tidy

The cut must be performed with clean equipment and as much precision as possible to cause as little damage to the plant material. It must always be made around the base of the third node, right above the two higher branches; after the third node, the cut may be made at any node. The plant experiences stress throughout the healing process; therefore, it’s best to make a clean cut (stress could paralyze vital functions of the crop).

Exactly what is going to take place here?

The plant will develop far more quality side buds, forming a bushy, compact structure full of buds, beginning at the cut node. The main stem will be destroyed permanently, but the plant will compensate by increasing the growth of two Y-shaped side branches.

Some suggestions for pruning

Overall, cannabis apical pruning is a useful technique for controlling the growth and shape of cannabis plants, as well as increasing the yield of buds per plant. It can be a bit stressful for the plant, but if done correctly and at the right time, it can lead to a better harvest.