3 FREE Snowman Seeds On Orders Over $150 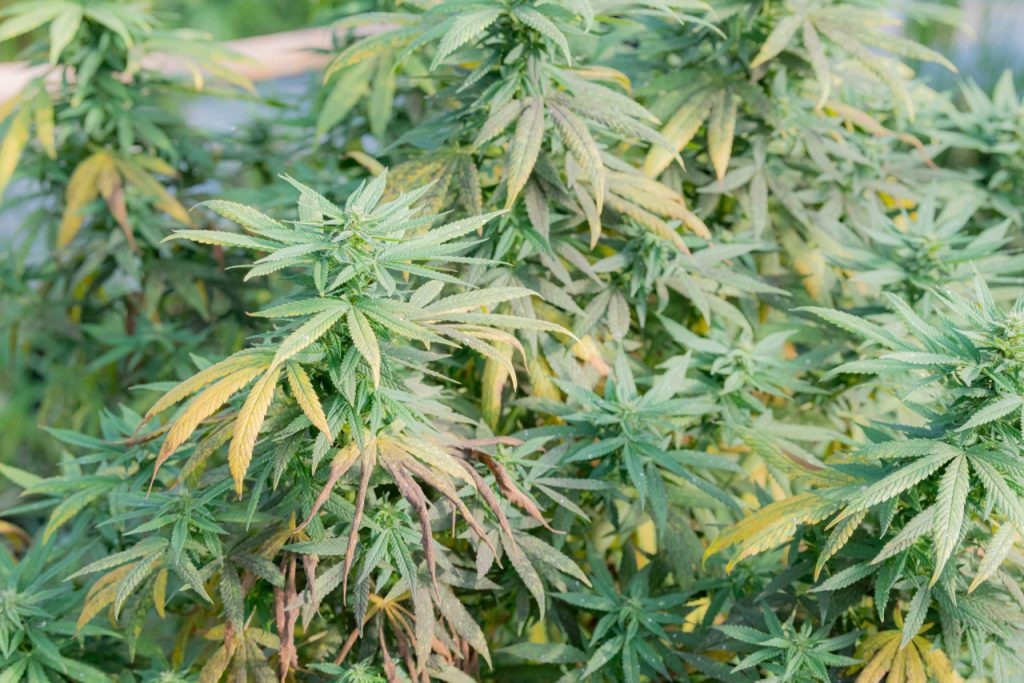 Nitrogen is a macronutrient essential for cannabis growth, especially during the vegetative period. Nitrogen, in large concentrations, may be hazardous to cannabis plants, producing stress, stunted development, and, eventually, dead leaves. Continue reading to discover more about nitrogen toxicity, detecting it, and what to do if your plants are affected.

Importance of nitrogen for cannabis

Nitrogen is an essential ingredient for thriving plants. Many healthy plants have three to four percent nitrogen. Plants require more nitrogen than many other nutrients since it is necessary for photosynthesis. Nitrogen is also required for protein synthesis. Plants die when they are deprived of protein. Nitrogen allows cells to utilize and preserve energy for metabolic processes. Nitrogen is needed for nucleic acids such as DNA. This will enable plants to reproduce and flourish. Additionally, plants cannot thrive if there is insufficient nitrogen available.

How does nitrogen toxicity affect your cannabis plants

Nitrogen toxicity cannabis causes clawed, glossy, unusually dark green leaves, poor growth, and weak plant stems. A claw is a leaf twisted at the tips to form a talon-like shape. Leaves frequently exhibit unusual cupping or curling. When the leaves develop claws, they turn yellow and perish. The leaves will gradually turn brown or yellow and fall off if nitrogen poisoning is not corrected. Toxicity in plants is typically caused by providing too much nitrogen, despite the huge amount necessary. Nitrogen toxicity in cannabis plants degrades plant quality by interfering with photosynthesis. Excess nitrogen in cannabis plants prevents proper bud development, reduces production and quality, and can result in poorer buds.

What is cannabis nitrogen deficiency?

Nitrogen is a critical ingredient for the growth of plants. The nutrient nitrogen, in particular, is essential for forming chlorophyll and amino acids. Nitrogen is thus required for cannabis germination, blooming, and bud development and plants that do not receive enough of this critical nutrient will wither and generate reduced yields. Plants that do not receive enough nitrogen may also perish. Cannabis naturally favors the tallest leaves of their plants because they receive the most light and make the greatest use of photosynthesis. If a plant lacks nitrogen, these leaves will acquire what little nitrogen is left for themselves, neglecting older, lower leaves on the stem.

If you see that the older, lower leaves are turning yellow, wilting, and dropping, this is a symptom of a cannabis nitrogen deficiency. This is not necessarily a concern in the latter stages of the growth cycle, but if it occurs during the vegetative phase, it can become a significant issue. If left untreated, leaves further up the stem will also become yellow, causing the plant to become stressed. The easiest method to avoid or correct such an issue is to feed your plants a well-balanced, multi-staged fertilizer product. Your plants may undergo nitrogen toxicity recovery if caught early and supplied with the proper balance of nutrients.

The only time growers require a cannabis nitrogen deficiency

With all the benefits nitrogen has for cannabis, why would you want to deny your plants this crucial nutrient? The question is not so much why as it is when. Only late in the flowering period, generally between the eighth and tenth weeks, will you want your plants to suffer a nitrogen shortage. This is because you want to extract chlorophyll from your leaves. Nitrogen is essential for forming chlorophyll, which plants require for photosynthesis. However, chlorophyll has an unpleasant sensation, similar to hay, and if you don’t remove it from your plants just before or after harvesting, you will end up with a bitter and unpleasant quality. You might induce a shortfall in the last weeks by watering your plants with only a modest amount of nitrogen.

Your leaves will turn yellow, which is a positive thing in this circumstance. However, it is not the end of the world if you cannot induce a nitrogen shortage after the flowering stage. You can also remove excess chlorophyll during the drying process. The idea is to extract as much chlorophyll as possible from your plants to improve their quality. As a result, don’t speed up the drying process because you are ready to use those huge, gorgeous buds.

Nitrogen toxicity in cannabis plants is most often caused by the following:

Toxicity is frequently produced by maintaining steady nitrogen levels without adjusting the nutrients. Although there are broad guidelines for plant care, each plant needs a unique nutritional combination to thrive. Before employing any therapy, all other possible causes of cannabis nitrogen toxicity should be addressed. This is because a lot of cannabis nitrogen is required for toxicity.

Cannabis nitrogen toxicity affects various strains in somewhat different ways. Certain plants do not claw, but their leaves turn unusually dark green. Other plants’ leaf tips can bend as much as 90 degrees. Some leaves coil like claws and then become brown or yellow before dropping off. Most plants’ foliage and leaves turn dark green, and the leaf tips dip downwards. Nitrogen toxicity in cannabis frequently results in nutritional shortages, which induce yellowing on the afflicted leaves. Cannabis nitrogen toxicity in flowers is usually accompanied by nutrient burn. Sometimes the clawed leaves appear randomly, with only a few leaves afflicted. When there are pH or heat difficulties, the clawing escalates owing to the high stress exerted on the plants.

When a plant is stressed, it absorbs extra water to compensate for weakened defenses. This raises nitrogen levels, exacerbating the toxicity. The leaves will soon turn yellow, spots will form, and the plant will die if the nitrogen toxicity cannabis is not addressed. The most prevalent cannabis nitrogen toxicity symptoms include:

Possible confusion of nitrogen toxicity with other symptoms

How to prevent cannabis nitrogen toxicity

Growers can avoid nitrogen toxicity cannabis in a variety of ways. Some of the most effective are:

How to fix nitrogen toxicity

Most gardeners will strive how to fix nitrogen toxicity in cannabis plants as much as possible, particularly during veg. Suppose your plants are vegging and just displaying early nitrogen toxicity symptoms. In that case, you should advocate letting them take care of the problem, especially if you’re growing photoperiod strains and can prolong their veg time indoors if necessary. In most circumstances, simply depriving your plants of nutrients for a week allows them to digest the extra nitrogen in their medium. Suppose your plants display more serious nitrogen toxicity symptoms or are in mid-bloom when the toxicity manifests. In that case, experts recommend flushing the substrate to remove excess nutrients and correct the issue as soon as possible. When flushing, use non-chlorinated, pH-regulated water or a moderate, full-spectrum fertilizer.

Feed your plants approximately a week after cleaning; water them only if the soil is completely dry. If the nitrogen toxicity symptoms persist that week, try flushing your plants again. Experts do not advocate transplanting specimens with nitrogen toxicity in cannabis because the stress would aggravate their condition. If you consistently experience nitrogen toxicity in flowers throughout your growth, you should reconsider your feeding schedule, the nutrients and medium you’re using, or the genetics you’re cultivating. For example, many Sativa strains and autoflowers are more susceptible to overfeeding than Indica and hybrids. How to fix nitrogen toxicity depends on several factors, including:

While nitrogen is a crucial nutrient, too much of it can harm your plants. In most situations, just stopping feeding and modifying the dosage of your fertilizer is enough to cure nitrogen toxicity—but be prepared to cleanse your plants if the problem persists.