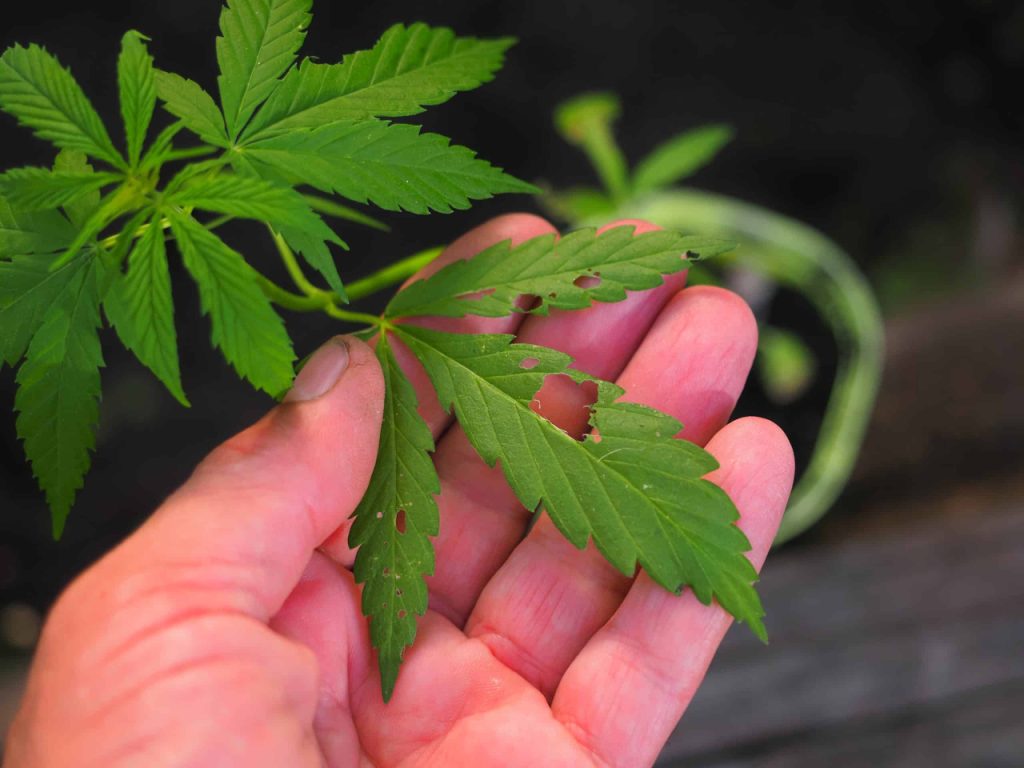 Broad mite damage can really mess up your crops but it need not be a death sentence for your cannabis plants.

Have you noticed a change in your crop’s leaves but can’t pinpoint its cause? Broad mites may have made themselves at home on your marijuana plants. Recognizing these pests is critical to protecting the well-being of your cannabis plants. They’re tiny pests that drain your crops of vitality without leaving any telltale symptoms.

Before an infestation starts, it might not be easy to see these little details. Being well-informed may help you prevent any damage to your plants. Similar symptoms are seen with other crop viruses and nutritional deficits. Before broad mite damage affects your plants, please educate yourself on recognizing them and rid your garden of them.

What are Broad Mites?

The term “mite” is used to describe thousands of distinct species. Over 90% are shorter than a human hair. Broad mites are the tiniest mite, while the largest mite is just about half that size.

Although they may spread disease to plants, the greatest harm they do is nutrient depletion due to their feeding habits on the leaves. As a result of transpiration, the plant’s growth rate significantly decreases as nutrients and water are lost via the leaves. Damage is typically prevented from new development due to the fluids and excretions that broad mites carry.

Broad mites belong to the family Tarsonemidae and are often seen on cannabis plants. They’re hard to track down because of their rapid movement, minute size, and general invisibility. Young, growing leaf tissue is the sole food source for the mites. Often, nutritional deficiencies may be traced back to broad mites because of the growth regulator they inject into the plants. There is a pressing need for accurate and rapid identification of broad mites.

The harm caused by broad mites is often significant if they go undetected. Broad mites are not exclusive to cannabis and feed on many other plants, such as peppers, cucumbers, eggplants, and tomatoes. Broad mites also like ornamental plants, including gerbera, azalea, geranium, and cyclamen. Since broad mites die off throughout the winter, they often don’t do any damage to plants planted outside in temperate climates. The plant will die if broad mites are not discovered in time.

If you don’t have access to specialized equipment, you won’t be able to detect them until the population has increased to a dangerous level and you begin to see clusters of egg masses throughout your plant. The sets of eggs are the telltale sign of a widespread mite infestation. They appear as small, round eggs with white tufts covering them and, depending on their development stage, what seems like tiny white spots.

Although broad mites, russet mites, and spider mites on cannabis have similar appearances and symptoms, you must distinguish between them before beginning treatment.

Where do you see broad mites?

Broad mites are so small that they can squeeze into tiny cracks in the branches and hide along the “veins” of the leaves, making them difficult to spot unless you know exactly where to look. However, they prefer the younger growth to lay their eggs on, so you’ll most likely find them on the undersurface of the new leaves and branches if they attack your plants.

Before beginning treatment on your cannabis plants, you must be certain that you have broad mites. You’ll need a loupe or a microscope to see and eliminate broad mites before they become a major problem.

The life cycle of broad mites

There is an egg, larval, and adult mites stage. Three sets of legs are present throughout the larval stage of the pest’s life cycle. After reaching adulthood, this rises to four sets. The third and last set of legs varies across the sexes. These aren’t normal walking legs. Between one and two days pass before the larvae emerge through the cuticle.

This phase is known by several names, including pupa, quiescent nymph, fake pupa, and even the fourth stage. The males employ their extra legs for transporting the dormant nymphs while they are still encased in the cuticle. Mating starts as soon as a female mite emerges from the cuticle. As their name implies, tarsonemid mites lack eyes. Females lay most mite eggs on the fruit or bottom of the leaves.

The oval eggs are long and stuck firmly to the surface. The eggs, at around 0.07mm in size, are rather big compared to the previous stages of development. These eggs are see-through and covered with tiny white spots.

A grower’s worst dread is discovering predatory bugs on their crop. It’s even more aggravating when you can’t readily recognize them on the plants owing to their size. The good news is that you can trust your crops’ indicators as they develop.

Unfortunately, broad mite symptoms on cannabis don’t become evident until 20-30 days following infestation. These insects don’t often attack the whole plant at once. The mites eat tender new growth, so remove any buds, leaves, or stems as soon as possible.

The leaves will show dark patches and linked stripe patterns if there are just modest infestations. When the condition is severe, the network is thick, and vegetation is almost nonexistent (apart from the veins). Leaves darken where broad mites have been feeding, leaving behind a pattern of yellow spots.

When your marijuana plants are infested, you may notice the following symptoms:

The blossoming period of cannabis is when broad mites do the most harm, turning the buds a brownish-yellow color and causing them to droop.

The meristematic cells of plants are vulnerable to harm by broad mites. When these tissues are removed from a plant, growth at the tips and apex is stunted. Discrepancies in leaf appearance are just the tip of the iceberg regarding the harm caused by broad mites. Pests and illnesses pose a serious threat to cannabis crops. The symptoms are similar enough to those of the Tobacco Mosaic Virus (TMV) that the two are often confused.

Discoloration of leaves is a common secondary consequence of an infection in both cases. What effect does the systematic face damage caused by cannabis-broad mites have on the plants’ viability, anyway? These parasites reduce agricultural yields by feeding on other plants. Lack of nutrients causes plant weakness, which in turn causes:

When mites need to move between plants in the wild, they ride the wind or attach to other animals. They thrive in contained environments that are conducive to reproduction. Try to avoid having broad mites in the first place rather than worrying about how to get rid of them. The following measures should be taken in addition to implementing an integrated pest management program (IPMP):

Many different approaches exist for dealing with broad mites. Neem oil may be used as a preventive measure and a treatment for pest problems. Diatomaceous Earth (DE) may be used in tandem since it is microscopically sharp. Damage to the exoskeleton causes dehydration and death in many invasive pests. Predatory mites may be used, which, in contrast to broad mites, feed only on those annoying tiny insects rather than your plants. Broad mites are a favorite food of the neoseiulus kind of mite, but if the infestation is too severe, even they may not be able to preserve the plant.

Heat is also an effective board mite killer. Bear in mind that heating your grow room to temperatures over 45°C for an hour may have an unfavorable effect on your ladies, even though some growers have reported tremendous success in fighting broad mites by doing so.

Finding a synthetic pesticide to spray may be the best option if you are not very concerned with organic gardening. These are normally very effective, but remember that spraying your plant with any pesticide, natural or synthetic, should be avoided during the last three weeks of flowering.

Last but not least, if your plants are severely damaged, you may want to consider starting again. If a mite infestation is bad enough, the plant will die within days, and the infection will spread to adjacent plants within hours. The grow room should be completely sterile before starting your next harvest if you’ve had a mite issue.

Broad mites are no different from any other mite, except that their microscopic size makes it difficult to detect them without the right tools. If you notice any yellow spots or deformed leaves on the younger plant growth, it is important to take preventative measures as soon as possible.